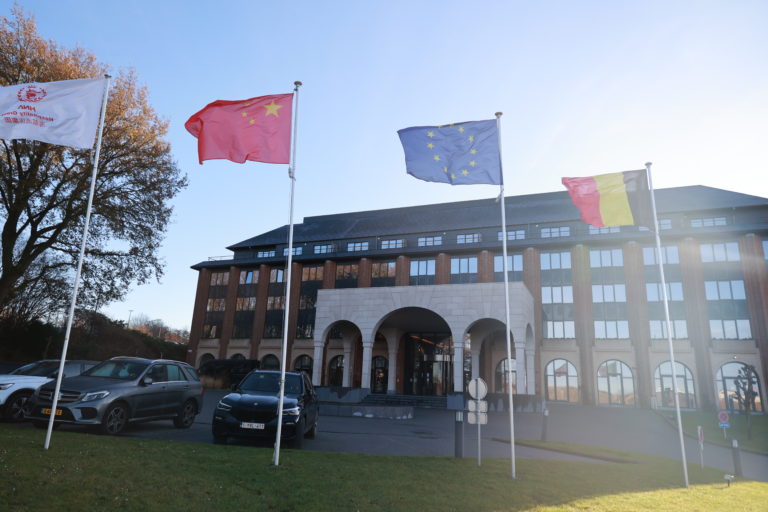 In celebration of the 50 years of diplomatic relations between Belgium and China, the Belgian-Chinese Chamber of Commerce (BCECC) successfully organized a hybrid event between the capital cities Brussels and Beijing on 7 December 2021 at the majestic Tangla Hotel in Brussels, “When Brussels meets Beijing: New opportunities for Belgian companies”. During this half day event, high level Belgian and Chinese officials were present both physically and online. The high level Chinese officials included Mr. Li Zhijie, the Deputy Secretary-general of Beijing Municipal Government & Ms. Liu Meiying, Deputy Chief of the Beijing Municipal Bureau of Commerce and Acting Deputy Director of Beijing Municipal “Two Zones” Office, who attended the conference live and online in Beijing. They started off with emphasizing the longstanding relationship between Belgium and China and the rich and mutually beneficial cooperation between Beijing and Brussels in the fields of manufacturing and business services, and then went on to explain the meaning of the Two Zones in Beijing to our participants. Namely, “The Integrated Demonstration Zone for Opening up the Service Sector” and the “China (Beijing) Pilot Free Trade Zone” and the opportunities these zones will bring to foreign investors and foreign companies looking to settle in Beijing. They furthermore expressed that they hope the construction of the Two Zones in Beijing will provide more opportunities and incentives for deepening the cooperation between China and Belgium

As a Belgian official, the State Secretary of the Brussels Capital Region Pascal Smet, was present in the form of a prerecorded speech where he stated that he is delighted to call the city of Beijing an old friend of the Brussels Capital Region, seeing as they will celebrate the 30th anniversary of collaboration in 2024. He also stated that even through hard times it is important to continue to have dialogue. To continue to exchange, people to people, by cultural initiatives but also by economic ways. That is why he expressed that this initiative by the BCECC and Beijing municipal government is very important to continue to establish a mutual understanding and respect between Brussels and Beijing.

Following the high level Chinese and Belgian officials our attendants were offered two testimonies by highly successful Western companies in China, BDO Services and Bird&Bird LLP, on their experience and insights of doing business in China. On the Chinese side there was also a short presentation by the Deputy director of Administration Committee of Lize Finance and Business District (FBD) and the Vice President Government of Affairs and External Relations of Veolia China, where they explained certain policies in the city of Beijing and its new commercial and financial districts.

Our participants, by attending this event, were able to expand their knowledge on a broad range of topics concerning the strong connection between Brussels and Beijing and how their business can profit from it.

The event was followed by a networking lunch where participants and speakers could exchange views and make new business contacts.

For some pictures of our event, please have a look in the gallery below.

Copyright of all pictures of this event – Wang Donglin