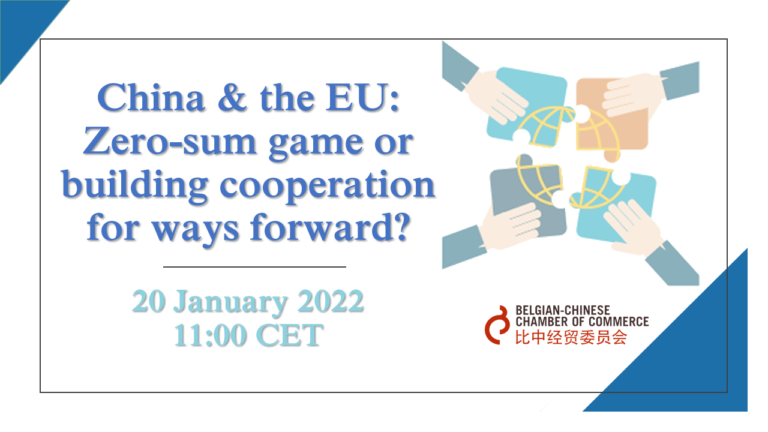 Even though tensions and the strategic competition between the West and China have recently risen, the EU and China have managed to construct a relatively stable and productive relationship across a number of policy areas.

What are the perceptions and misperceptions that the West and China have of each other? Are they really playing a zero-sum game where a win for one is automatically a loss for the other? How can they build a relationship built on mutual trust and cooperation, in order to tackle major global challenges? What can the impact be for your business?

We’re looking forward to start off a new year of the BCECC events with our webinar “China & the EU: zero-sum game or building cooperation for ways forward?” on January 20, 2022 at 11:00 CET, featuring 2 experts in international relations with impressive careers. Mr. Duncan Freeman and Mr. Jamie Shea will discuss EU-China relations and the impact on the world economy.

Dr. Duncan Freeman has a BA in Politics and Modern History from the University of Manchester, an MSc in Chinese Politics from the School of Oriental and African Studies, University of London, a Postgraduate Diploma in Economic Principles from the School of Oriental and African Studies, University of London and a PhD completed at the Vrije Universiteit Brussel (VUB) on domestic institutional factors in determining China’s outward investment. He currently lectures at the Brussels Management School (ICHEC) and is Visiting Professor at the VUB. He has previously been Research Fellow at the EU-China Research Centre of the College of Europe. Prior to this he was Research Fellow and taught and carried out research on China’s economic and policy development in addition to EU-China relations at the VUB. He has also lived and worked in Beijing and Hong Kong for a total of 17 years and is fluent in Chinese.  During his time in Hong Kong, he was the editor and publisher of several leading publications on the Chinese legal and tax systems and their impact on international businesses operating in China. His co-edited volume, The Evolving Relationship between China, the EU and the USA: A New Global Order?, published by Routledge, was recently named as one of the Choice Outstanding Academic Titles for 2021 of the American Library Association.

Mr. Jamie Shea was Deputy Assistant Secretary General for Emerging Security Challenges at NATO Headquarters in Brussels until his retirement in late September 2018. He received his B.A. in Modern History and French from the University of Sussex (1977) and his D.Phil. in Modern History from Lincoln College, Oxford (1981). Mr. Shea was appointed Companion of the Order of St Michael and St George in the 2020 New Year Honours for services to diplomacy and public service. He is currently Professor of Strategy and Security at the University of Exeter, President of the Centre for War Studies at the University of Southern Denmark and a Senior Fellow at the Friends of Europe think tank in Brussels.

Location:
Zoom (link will be sent out to the participants upon registration)