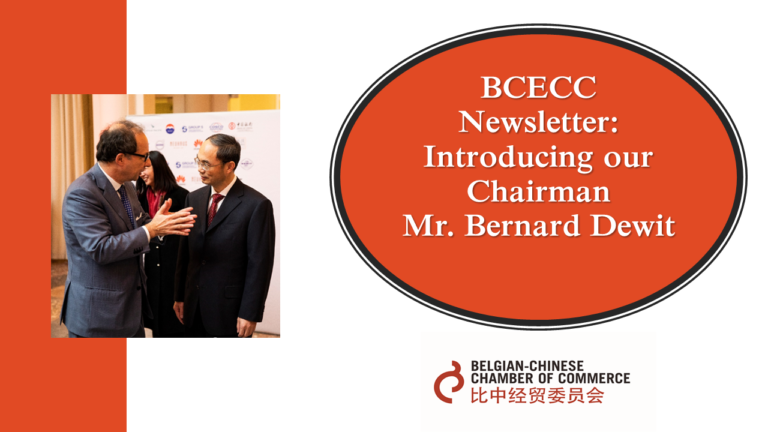 In this article we introduce the Chairman of our Belgian-Chinese Chamber of Commerce (BCECC), Mr. Bernard Dewit. Mr. Dewit has been actively engaging in China-Belgium economic and trade investment cases since 1983, promoting China-Europe cooperation. He helped many Chinese companies going abroad and gave valuable legal and commercial advice to a large number of European investors in China. For his outstanding contributions to China’s economic and social progress, on 30 September 2017, Mr. Dewit received the Chinese Government Friendship Award in Beijing from Vice-Premier Ma Kai.

This year, Mr. Dewit celebrates his 25th anniversary of the presidency of the Belgian-Chinese Chamber of Commerce. Coincidently, this year we also celebrate the 50th anniversary of diplomatic relations between the Kingdom of Belgium and the People’s Republic of China. When asked to look back at these more than three and a half decades of Belgian-Chinese economic relations, Mr. Dewit mentioned that “it is incredible to see how those relations developed. Throughout the years, we have been witnessing that China has become the top economy of the world and more and more Belgian companies are involved in doing business with China. When I started the presidency of the Chamber in 1996, we had about 100 members. Now we are very proud with our more than 500 members. Foreign trade between Belgium and China has increased significantly.”

With his Master in Law studies and his interest in China, at the end of the seventies Mr. Dewit noticed that the Chinese government started to introduce new laws and regulations. “For young lawyers like me, it was interesting to follow this new phenomenon. In the eighties, there was only a little club of foreign lawyers who were interested in China and Chinese law. Now, the number of foreign lawyers is huge and universities all over the world have a Chinese law department. With all the exchange programs, there is a new generation of foreign students in China, as well as Chinese students in foreign universities.

As Senior Partner of Dewit Law Office, with offices in China and Belgium, Mr. Dewit has been a privileged witness of the perception by Belgian companies and investors towards the Chinese law system and the development of the protection of intellectual properties in China. Mr. Dewit states: “China’s legislation is much more sophisticated than it was before. Foreign companies that are doing business in China are more conscious of the necessity to take into account the legal system in China when negotiating a contract. It is also very important to have your intellectual rights protected. Today, the legal system is well organized in China. In big cities, such as Beijing, Shanghai and Shenzhen, where most of the foreign investors are present, the court system is very efficient. Of course, in remote provinces you still have people with less experience, but for sure, China is not the country without rules anymore. For my law firm, the fact that I have an office in Beijing is important, because I can give legal advice to Belgian clients going to China. For Chinese clients in Belgium, our office in China can stay in touch with the head office in China.”

For different reasons, Mr. Dewit was very honored to receive the Chinese Government Friendship Award in 2017. “It is a great honor for experts to be invited to the awards ceremony and it is not only in recognition of the foreign expert’s contribution to the Chinese, but also a symbol of friendship. Furthermore, it was also appreciation for the good work of our Chamber in trying to be a bridge between Belgium and China. Talking about the future: There are still a lot of challenges in the future, both for me personally as for our Chamber.”

Finally, it is clear that doing business in China will remain a challenge for many Belgian companies. When asked about his expectations for the future, Mr. Dewit replied: “China’s importance will continue to grow in the global economic order. This means that companies cannot ignore China. China is an inspiring society, adapting itself rapidly to new challenges. It is not easy to do business in China, but if Belgian companies are well-prepared and take into account the specificities of the Chinese market, you can be very successful. I have seen that China has done lots of efforts the last 25 years to open their economy. I prefer to have a prosperous China, because a prosperous China offers opportunities for our companies.”