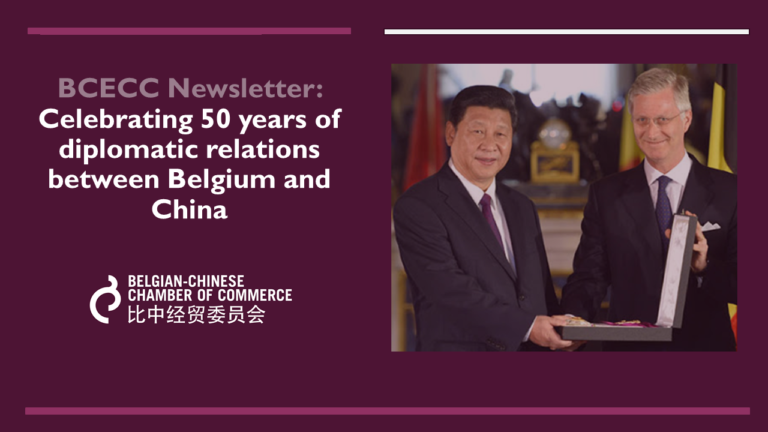 The year 2021 marks the 50th anniversary of the establishment of diplomatic relations between the People’s Republic of China and the Kingdom of Belgium. Diplomatic relations between the two countries were established on 25 October 1971, with Jacques Groothaert as the first Belgian Ambassador to China. Ever since the establishment of diplomatic ties, the bilateral relation between China and Belgium has maintained its smooth development.

Fifty years of diplomatic relations between Belgium and China have been characterized by regular contacts at the highest political level, by the warm friendship between the respective inhabitants, by increasing investments, growing trade relations and close cooperation on a multilateral level. Today, Belgium is China’s sixth largest trading partner in the EU and China is Belgium’s second largest trading partner outside of the EU.

In the context of this 50th anniversary, the Belgian Embassy and all Consulates General of Belgium in China are organizing events to promote Belgium-China relations, encouraging exchange and strengthening relations in various fields such as trade, education, science and technology, culture, etc. Throughout 2021, Belgian delegations will be paying visits to different cities and regions in China, such as Guangzhou and Shenzhen, Xi’an, Jiangsu, Chengdu and Chongqing, and so on.

In March 2021, a fruitful exchange with the Governor of Guangdong province, Ma Xingrui in Guangzhou,allowed for an exchange of views on how to deepen the cooperation.  Especially cooperation in the sectors with Belgian expertise, such as logistics, cleantech and healthcare were discussed, but the partnership between the Belgian province of Limburg and Guangdong as well.

Guangdong is also host to several Belgian companies, including Umicore in Jiangmen. Umicore is a global materials technology and recycling group with a history of more than 200 years. Founded in Belgium, the company is  now active all over the world, including in Shanghai and Jiangmen. The delegation visited the facilities of Jiangmen Umicore Chang Xin New Materials Co. Ltd, where emission control catalysts and materials for rechargeable batteries and recycling are produced.

During a visit to Xi’an in April, the Belgian Ambassador H.E. Mr. Jan Hoogmartens was welcomed by the Governor of Shaanxi province, Mr. Zhao Yide. The two discussed the 50th anniversary of the diplomatic relations and the rich history of cooperation between the province and Belgium, including the 35-year partnership between the Provinces of Antwerp and of Shaanxi. Furthermore, they explored areas of further cooperation, such as logistics, life sciences and cleantech.

Shaanxi province is of particular significance for the bilateral relationship as in the 1980s, Janssen Pharmaceutica was amongst the first Belgian companies to set foot in China. Xi’an Janssen is China’s biggest pharmaceutical joint-venture and one of the first investments of Belgium into China.

During his visit to Xi’an, the Ambassador met with a delegation of Xi’an Janssen, who walked the Belgian delegation through the latest progress of the company and its prospects for the future. With 29 offices in China, Xi’an Janssen has 3000 employees and focuses on 9 therapy areas with impressive innovation capacities.

Xi’an Thiebaut Pharmaceutical Packaging is another key player in its sector: the joint-venture created in 1999, which is located in the Xi’an National High-tech zone, specializes in the production of collapsible aluminium tubes for packaging pharmaceuticals, cosmetics, and fine chemicals. Its history is linked to the Antwerp-Shaanxi cooperation too, as the company also contributed to the development of the pharmaceutics ecosystem in Xi’an.