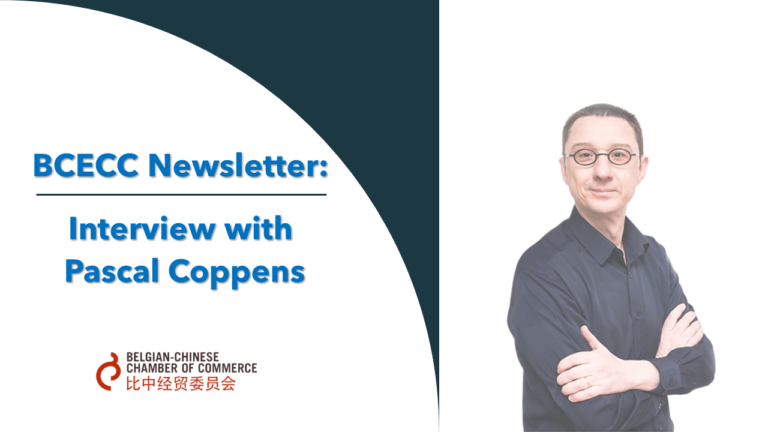 At the occasion of the publication of his second book about China, called ‘Can we trust China?’, the Belgian-Chinese Chamber of Commerce (BCECC) interviewed Pascal Coppens, a Belgian tech-entrepreneur who lived and worked in China for 20 years.

Could you briefly explain the origin of the book?

In 2018 I wrote my first book, called “China’s New Normal: How China sets the standard for innovation“ In this book I talked about my experiences as a tech-entrepreneur in China in the past 20 years and my view on China’s future. People reading that book were impressed by the disruptive technologies in China and its speed and scale of development. In the beginning of 2020, I was planning to write a sequel of my first book, but then the Covid-19 pandemic emerged. The general perception about China changed dramatically: from an impressed and predominantly positive interest in China, Western people and businesses suddenly started looking at China with a sense of anxiety and negative restraint. More and more people don’t seem to trust China any longer. That’s why I decided to change my plan and focus on trying to find where this distrust comes from for my second book.

How did you do that?

I interviewed numerous Western and Chinese friends and experts and asked their opinion about a multitude of topics. I started from the assumption that there is a lack of understanding on both sides and that, if we don’t listen to each other any longer, we will never be able to build a long-term cooperation.

As an example: the Chinese government is adding more structure to its economic ecosystem. It’s the end of limitless opportunities in China. Now the government approach is more realistic and down-to-earth. Take for example what happened with Alibaba, or the private education and the gaming sector in 2020. From a western point of view, we see this as a ‘cracking down’ of on the tech-, education and gaming sector, and China’s government taking control over the economy. But from a Chinese perspective this is just the next step in the development of China’s ecosystem to an improved level-playing field for all citizens and companies, fighting the destructive excesses of a tremendously competitive society.

How do you see China’s new position in the global economy?

China has now become much more assertive. After thirty years, the dominance of the West is fading, and China is increasingly able to build on its own strengths. In addition, in recent years, China has paid a lot of attention in bringing the Chinese society out of poverty and stimulating consumption, which conflicts with the image Western countries have of a country violating human rights. China no longer wants to be patronized by the West, which leads to the perception in the West that China now wants to force their system upon us, which is obviously not correct.

What would be your advice to Belgian companies considering doing business in China?

We need to see China as an equal partner, rather than a competitor, a low-wage country or a place to dump our surpluses. Look at what the country has to offer in terms of brains, not just physical labour. I would also advise companies that do business with China not to jump to conclusions based on negative reports. You basically have two choices as a company: or either you do nothing, or you make sure that you are ready for China.

So, what about trust and China?

Most Chinese people trust their leadership, and I know for a fact that most Belgians do not trust their government. In my book I try to give two sides to the story and not just our Western perspective. It is crucial to realize that Beijing is not so much about control and power, as it is about progress. Obviously, these things are interrelated, but the objective has always been to create more security by means of economic development and interconnectivity with the whole world, including countries which are often ignored by the West. Western countries see the world mainly in terms of geopolitical power, and that is by definition a context of distrust.

It is important to take a different look at a country in transition (which is also the subtitle of my book). China knows what it wants and where it wants to go, but does this also apply to the West? Europe must urgently realize that the Western view and the linear pattern of thinking are no longer the only world view. By aiming for the same goal, Chinese and Westerners should get to know, understand, appreciate and… trust each other better – with an open mind and with vigilance!

If you want to learn more about doing business in China, please contact us or follow the official WeChat account of the Belgian-Chinese Chamber of Commerce (BCECC).