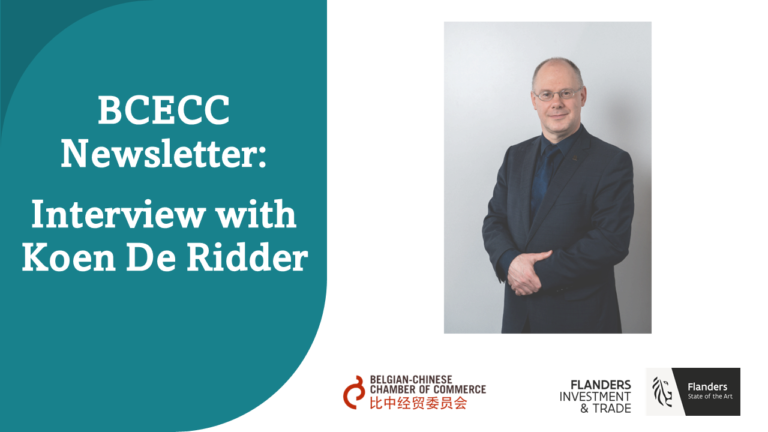 1. You just started as Economic representative in Beijing for Flanders Investment & Trade (FIT). You are an ‘old China hand’, because you already spent a big part of your life in China. Could you tell us a bit more about your previous China career and experiences?
Since 1 June 2022, after more than a decade, I am back at Flanders Investment & Trade as a Flemish Economic Representative in Beijing. I am a sinologist by education, from 2001 to 2003 I was the Flemish Economic Representative in Tunis and from 2003 to 2010 in Guangzhou. From 2011 to 2017, I worked in Hong Kong as Head of the Belgian Desk Greater China for a Big Four consulting company. From the end of 2017, I worked at UNIZO as Senior Advisor International Affairs, where I was the driving force behind the Masterclass China Business (2018, 2019 and 2020) and the China module of the Masterclass International Business (2021). During my time at UNIZO, I remained active in international trade promotion and, in the context of my assignment there, I sat on the board of directors of Flanders Investment & Trade and the Foreign Trade Agency.

2. Before joining FIT for the 2nd time in your career, you were responsible for international business at UNIZO. How do you consider the current economic environment from the perspective of Flemish/Belgian companies?
My period at UNIZO was a wonderful learning experience and a great enrichment on a professional and personal level. The members of UNIZO are usually small business owners, and as such, they truly are the backbone of our society. Being a small enterprise, I quickly noticed, does not mean international inactivity or a lack of global awareness. On the contrary indeed! The most truly international people I met were small business owners and SME leaders. I was struck by the fact that, for many among them, China was very much on the radar, albeit not necessarily for export purposes, but rather as a supplier for parts, finished products and raw materials.

Not surprising that China is the 5th largest supplier of Flanders! Obviously, the supply chain crisis caused by the Covid-pandemic had a major impact on many Belgian companies. It was admirable how flexibly many SME and small businesses coped with the emergency, for instance by making use of alternative logistics options, such as train transport to and from China. It was also interesting to observe how many found their way towards digitization.

However, Covid also taught us that business always is people business. From a distance, it is very difficult to handle quality controls, install machines or meet potential clients of business partners. Human contact in doing business is extremely important. At this very moment, the biggest challenges for companies doing business with China are the travel restrictions, the currency fluctuations and the (still) expensive transport costs. On top of these challenges, many companies are also complaining about challenges unrelated to China, such as labor shortages and heavy energy costs.

3. The relationship between Belgium and China has always been quite strong, with many Belgian investments in China or Chinese investments in Belgium and many successful activities in trade, cultural exchange and other forms of Sino-Belgian relations. How do you see this from your perspective?
In 2021, Belgium and China celebrated 50 years of diplomatic relations. Belgium was one of the first Western countries to cooperate with China, and some Flemish companies have been contributing to China’s development in their own ways. In this context we think of Xi’an Janssen Pharmaceutical, one of the top 10 joint ventures in China, and Bekaert, which set up production platforms in Chongqing, Huizhou, Jiangyin, Qingdao, Shenyang, Suzhou, Weihai, Hangzhou, Taicang, Jining and Shanghai. Another Flemish company which made a tremendous impact on China is Anheuser-Busch InBev, which first entered China in 1984 by investing in a Guangzhou brewery and which from 1998 on formed partnerships with a number of leading Chinese brewers in a variety of Chinese cities.

Trade relations between Belgium and China have grown tremendously as well, and China is currently Belgium’s sixth-largest trading partner, making up about 4.1 percent of Belgium’s trade. Belgium is China’s sixth-largest trading partner in the European Union, and trade between Belgium and China has grown 16.4 percent over the past 10 years. When we look at the region of Flanders specifically, we see that in 2021 our region exported for more than 7 billion euro worth of goods to China.

Moreover, economic, diplomatic and intercultural exchanges between our two countries have also developed strongly. Some Belgian provinces have established partnerships with sister regions in China, with an emphasis on long-term economic cooperation. In this context we think of the partnerships between West-Flanders and Zhejiang, Antwerp and Shaanxi and East-Flanders and Hebei. These long-standing agreements are a big advantage for Belgian companies in China.

4. Beijing is the capital of China and considered to be the political hub of China. Apart from Beijing, you are also responsible for the North-West and North-East region in China. Which industries or sectors do you think are most interesting for that part of China?
China is the largest consumer food and beverage market in the world. Although the distribution channels and local infrastructure are not always ideal and there is more and more local competition, China remains a strong growing market for European food and beverage exporters.

To get your products into China, however, you will need to deal with China customs and border regulations, as well as abiding by local labelling rules and product safety standards. In China regulations can change quickly and application of regulations can vary across regions and ports. One must also keep in mind that many Chinese importers are currently not keen to import frozen food products (due to the Covid situation), as the Chinese government imposes extremely strict requirements. In addition, there is still a ban on the import of pork and chicken. With all this in mind, it is clear that it is important – especially for SMEs – to have a local partner (an agent or distributor) with an import license who understands the process of import.

There are also opportunities for healthy food (and nutritional supplements). China’s increasing problem with obesity has made weight management related products a great potential. Despite China’s obesity rates remaining low compared to western countries, it is still something of great concern as one in five kids is overweight. Furthermore, it is estimated that in China, 114 million people live with diabetes. Not only does China account for over a quarter of the world’s diabetes patients, but an estimated half of these cases are undiagnosed. At this rate, the Chinese diabetes care and prevention market is booming, but it still does not fulfill national demand. The issue is so serious, that the World Diabetic Organization is considering diabetes in China to be a “crisis”.

Closely related to the issue of diabetes are the huge market opportunities for elderly care. Because of the ‘one child’ policy which has been implemented for many years, and the ever-increasing life expectancy of the Chinese, the population pyramid in China has been severely disrupted. According to recent calculations, the aging population would evaluate to a ratio of 64 elderly people to 100 in its active population by 2025.

Another interesting market is pet food. Driven by a desire for companionship, especially during Covid, more and more Chinese have chosen to bring a pet into their houses. One of the main drivers for the growth in pet ownership is the rising disposable income among Chinese consumers, allowing them to spend more on their pets. This has resulted in an increase in pet owners in China looking for pet products, with the largest sector being the pet food category, taking up over 50% of market value. In fact, the pet food market exceeded RMB 119 billion in 2020, and is expected to double again by 2025.

In addition to animal nutrition, a lot is also spent on nutritional supplements, care & health, education/training, photography, and even pet funerals. Then of course there are the cleantech opportunities. By 2025, China aims to be able to store 30 million kW of clean energy. According to the 14th Five-Year Plan , cleantech should mainly focus on urban households, transport and logistics, agriculture and countryside and ecological infrastructure. In particular, the same 14th Five-Year Plan seeks to combat marine and river pollution, urban wastewater, agricultural and rural pollution, and ozone pollution.

5. What would be your advice to Belgian companies when they consider coming to China? Or should they still consider coming to China in the first place, taking into account the current geopolitical challenges and the economic slowdown?
One of the aspects I love about my job is that that my “clients” – the entrepreneurs and export managers – tend to be optimistic by nature. And indeed, we have reason to be optimistic. China is an emerging world power and therefore it remains an important export market. No doubt about that. I also think that companies who are already successfully doing business in China will continue doing so, despite the new hurdles and challenges caused by Covid.

China was never an easy export market to begin with, but over the years I did see many successful export stories. The difference was often made by a good local partner. But before thinking of finding a partner, one needs first to sit down and think carefully about a strategy. I urge companies only to come to China after giving this market a firm place in their international strategy. Resources and time will have to be invested and a great deal of knowledge and information will need to be collected by attending master classes, networking events, lectures and presentations.

For ambitious companies without China experience, now is the time to study, observe and get prepared. For companies which are already in China, it is important to remain engaged with their local partners by digital means. It is not ideal, I know, but it is better than nothing and after all, this situation is only temporary. Last but not least, make use of the China-network of Flanders Investment & Trade. We are there to assist our exporters, free of charge, and we can help them to connect with potential partners.