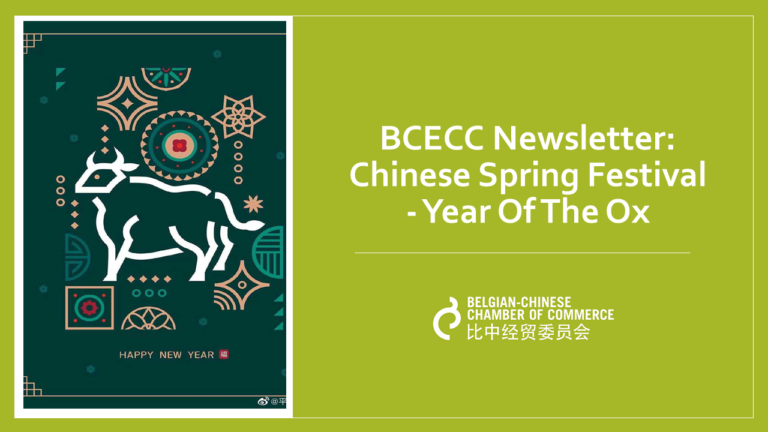 On 12 February 2021, China celebrates Chinese New Year, also known as Spring Festival. It is China’s most important festival and celebrates the beginning of a new year in the traditional Chinese calendar. 2021 is the Year of the Ox, the ox being one of the 12 Chinese zodiac animals, ranking second after the rat. The other 10 Chinese zodiac animals are: tiger, rabbit, dragon, snake, horse, sheep, monkey, rooster, dog and pig.

Businesses are closed for a 7-day holiday period, to give Chinese citizens the chance to celebrate with their families. This year it will be more difficult to travel back to their far-away hometowns, because of stricter measures against COVID-19.

The ox is a symbol of diligence in Chinese culture and links to many myths, the story of the Cowherd and the Weaver Girl being one of the most well-known. In ancient times, people used oxen to pull ploughs to work the land. Later on, people discovered that oxen had great power and began to use them for various purposes, ranging from farming and transportation, to even military purposes. In China, it is generally believed that people who belong to the ox (that is, those born in the year of the ox) are more diligent and stubborn.

In modern times, cows are sometimes even used as a symbol of economic wealth. For example, the continuous rise of stock prices is called a “bull market” and a decline is called a “bear market”, because the bull symbolizes production and appreciation, while the bear personifies the meaning of “destroyer” and “threat”.

As the most important traditional festival in China, Spring Festival shopping, giving gifts and self-pleasing consumption have become indispensable consumption habits. Therefore, this festival is still the largest consumption period in China. Many merchants are selling those red belts, socks and other red products. They are using traditional Chinese culture and customs to launch a series of products related to the birth year and the zodiac year.

According to statistics, Chinese citizens’ consumption during the Spring Festival is several times or even dozens of times that of ordinary times. They buy products such as Spring Festival couplets, New Year paintings, gift boxes, cigarettes, alcohol, snacks and so on. Over the past two years, with the growth of the post-90s generation, a consumer group age change has taken place during the Spring Festival, and the demand and consumption characteristics of this new consumer group have also changed.

Due to the COVID-19 pandemic, this year’s Spring Festival goods consumption is mainly focused on e-commerce. Therefore, many major e-commerce platforms have launched “Spring Festival goods festival” discounts and promotions. When prices are no longer the primary factor of consumers’ concern, businesses need to return to the fundamental issue of product quality, pay attention to the demand changes brought about by age iteration in the New Year consumer market, and develop innovative business models.