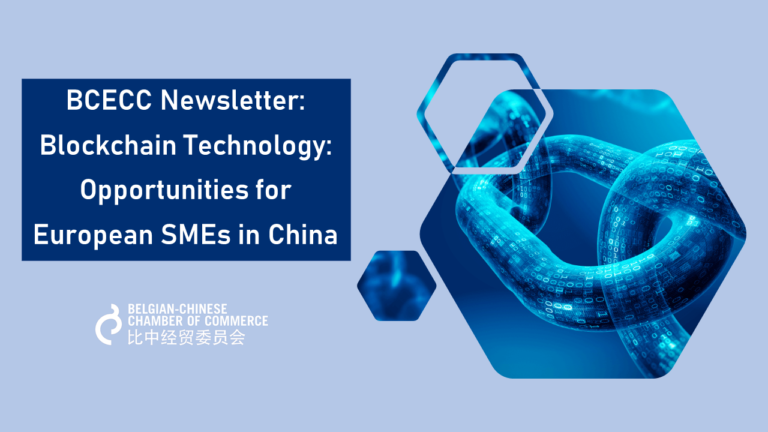 In a webinar on 4 March 2021, co-organized by the Belgian-Chinese Chamber of Commerce (BCECC), Eurochambres and the EU SME Centre, the future of and opportunities around blockchain technology in the Chinese market were explained.

‘Blockchain’ is a term that first emerged in 2009 in the context of Bitcoin. Bitcoin is an online digital currency that was first published on the internet in 2009 by an anonymous group or person known as Satoshi Nakamoto. In spite of its first introduction as a support of cryptocurrency, today there is much more talk about the underlying technology known as blockchains. Therefore, the knowledge and understanding we have around this very young technology is evolving at a fast pace. This leads to people all over the world being convinced that the adoption of blockchain technology has the potential to fundamentally change our legal, economic and political systems.

In order to fully understand the effects of blockchain technology on our living situation, it is important to comprehend what the fundamentals are that make this technology so intriguing and game changing. Blockchain is a particular type of database, which employs cryptography and algorithms to record information in a ledger in an immutable manner and stores it in blocks. Once filled, each block is “cast in stone”, given a timestamp and chained together to the previous block with a hash code. This string of blocks, with their own hash code, timestamp and ledger are then housed in a number of computers (nodes), all connected to one another. The reason why this technology is revolutionary is because it leads to immutability of documents, anonymity, transparency, an incredible ease of transfer and an undisputable proof of origin.

Blockchain in China:
The Chinese population is wildly enthusiastic about blockchain technology and its implementation. At first, the Communist Party was less convinced because of the link with cryptocurrencies like bitcoin. In October 2019, President Xi Jinping officially stated for the first time that he supports the rise of Blockchain technology. After Xi Jinping urged to “seize the opportunities”, in April 2020, the National Blockchain Committee was set up with government, academia and tech giants (Alibaba, Tencent, Huawei and others) to ensure that the national standards will be in compliance with all existing laws in China.

Additionally, China created the Blockchain Service Network (‘BSN’), a Government-backed blockchain infrastructure network that acts as an operating system for blockchain programs, so that developers won’t have to design a framework from the ground up. Hence, China is quick on the ball to promote blockchain technology domestically but is also very geared up to make sure it controls its developments.

The pro-blockchain, less-cryptocurrency policies of China will more than likely persist in the future. There are two areas in the future of blockchain development in China that are particularly worth following:

China’s National Digital Currency, DCEP (Digital Currency Electronic Payment): DCEP will be built with Blockchain and Cryptographic technology. This revolutionary currency will be the very first Central Bank Digital Currency (CBDC). It is currently being tested in the cities of Shenzhen and Suzhou. The goal is to increase the circulation of RMB and push its international reach.

Further development of the Blockchain Service Network: the Chinese are well aware of the fact that Blockchain is going to be an integral part of China’s new digital infrastructure. Exactly for that reason, BSN was launched on April 25, 2020. The aspiration is for companies and software developers to be able to plug into the BSN and build blockchain-based applications as easily as assembling Lego sets. There will be two versions available: “BSN China” and “BSN International”; one network, with different governances. BSN China utilizes permissioned, private blockchain networks, while BSN international incorporates permissionless, public blockchains.

Opportunities for European SMEs:
The uprising of Blockchain technology in China comes with many different business opportunities for innovative European SMEs. If Belgian SMEs are fully aware of the upside of Blockchain, they reap the benefits of its technology through enhanced transparency and traceability in the form of easier payment solutions, smart contracts, supply chain traceability, etc.

In conclusion, the adoption process of Blockchain technology will be slow and steady, however inevitable. Today Blockchain is at a tipping point, and for the SMEs willing to accept decentralization as their future way of doing business, it has the ability to solve many issues that SMEs experience on a daily basis. Blockchain has the ability to level the playing field against larger enterprises. Are you ready to compete?

If you want to know more about Blockchain opportunities for European SMEs, The Belgian-Chinese Chamber of Commerce (BCECC) strives to help you get the information you need to prosper and is able to help you get one step closer to potential business partners in China.