BCECC Newsletter: 26 years of partnership between Brussels & the province of Sichuan 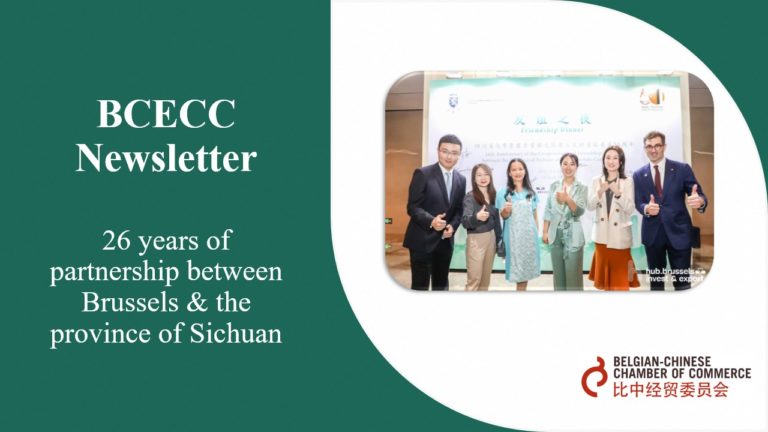 This is the last article of our series of articles about the celebration of fifty years of diplomatic relations between the People’s Republic of China and the Kingdom of Belgium.

In this article, we will highlight the 26 years of partnership between the Brussels-Capital Region and the Province of Sichuan. In 1995, the Brussels-Capital Region signed its second partnership agreement in China, after the city of Beijing in 1994, with the Provincial government of Sichuan. The partners who signed the agreement for Brussels were no less than the founding fathers of the Region, Charles Piqué and Jos Chabert.

The 26th anniversary was celebrated on June 10th, 2021, after the 25th anniversary festivities had to be cancelled in 2020. Ambassador of Belgium to China, His Excellency Dr. Jan Hoogmartens, hosted a Friendship Dinner as part of his tour of the Chinese provinces in the framework of the 50th anniversary of diplomatic relations between Belgium and China. Before that, an official meeting was held with Vice Governor Li Yunze.

Both regions share a long history, but ties have grown even stronger in recent years. A remarkable collaboration was the help the Brussels-Capital Region gave to the relief program after the big earthquake in May 2008 in Sichuan, by financing the Handicap International actions to help the victims recover from their injuries. This program gave ‘eternal recognition’ to the partnership.

In 2013, a cultural and academic cooperation has been installed through the exhibition of contemporary art WANDERLUST at the Museum of Contemporary Art (MOCA) in Chengdu, which led to the creation of a Master of Arts curriculum between Sichuan University and the VUB (Vrije Universiteit Brussels).

In 2015, a partnership between a Brussels school (MAW-Meertalig Atheneum Woluwe) and a school in Chengdu (Shude High School) lead to multiple exchanges. MAW also participated in the Sichuan Province Summer Camp, along with five other European high schools.

Another strong point of collaboration was the participation of Sichuan Province to the culinary festival ‘Eat!Brussels’ (held each year in September). From 2012 until 2019, the Daronghe restaurant from Chengdu came to present its famous Sichuan cuisine.

The 20th anniversary of the agreement was celebrated in 2015, in the presence of Brussels State Secretary for Foreign Trade Cécile Jodogne, accompanied by a delegation of businesspeople. A concert by Jean-François Maljean (known in China as Shang Ma Long) was one of the highlights of the mission. For this mission, the Brussels-Capital Region worked together with the BCECC-representative in Chengdu Eileen Wang.

There are not so many Brussels-based companies active in Chengdu, the capital of Sichuan home to 20 million inhabitants, but you may find some shops called Leysen, Delvaux, Godiva and soon also Marcolini in its shopping centers. One big result of the ‘Brussels diplomacy’, on the other hand, is the launch of Chengdu-Brussels cargo flights by Sichuan Airlines at the end of 2019, after lobbying by Brussels Minister Guy Vanhengel during his visit to Chengdu in 2018. Sichuan Airlines won the ‘Brussels Airport Cargo Award’ in 2020.

Ending with some jolly news: in 2019, a delegation of 38 members of the Brussels fire brigade took part in the World Police and Fire Games in Chengdu. They won no less than 45 medals, in different disciplines. The most impressive ones were the gold medals in climbing (up and down) the stairs of a 100 stories high skyscraper in Chengdu. Congratulations!

For more information about the sister relationship between the Brussels-Capital Region and the Province of Sichuan, please contact us, follow the official WeChat account of the Belgian-Chinese Chamber of Commerce (BCECC) or check out http://hub.brussels.