BCECC Newsletter – 15 years of China Platform at University of Ghent 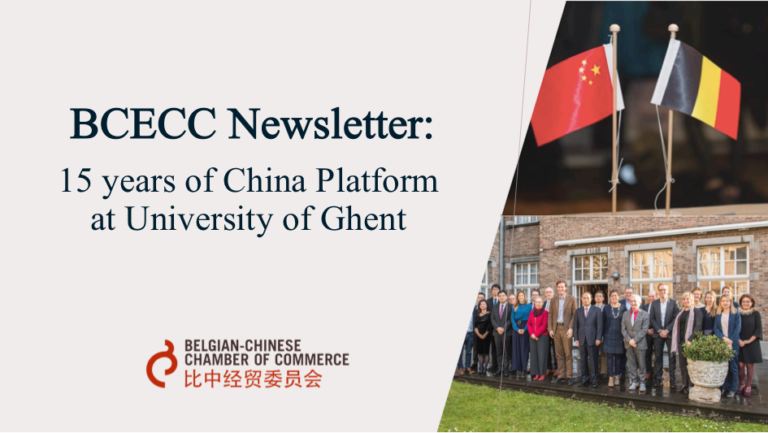 On 21 March 2022, Ghent University celebrated the 15th Anniversary of the China Platform in Ghent in the presence of Prof. Rik Van de Walle, Rector of Ghent University, and H.E. Mr. Cao Zhongming, Ambassador of the People’s Republic of China to the Kingdom of Belgium.

A lot of activity preceded the foundation of the China Platform. “As early as the 70s and 80s, professors from Ghent University regularly traveled to the country for projects with Chinese partners. It was certainly not easy back in those days”, Prof. Luc Taerwe remembers. “If you want to cooperate with China, you must overcome two major barriers: the language and the culture.”

In 2008, only two years after its foundation, a representative office was already set up in Beijing. This China office plays a key role in various areas, as well as maintaining close contact with Belgian diplomatic posts in China, whether it’s networking with Chinese institutions, developing alumni activities or strengthening the local image of Ghent University.

Over the years, the China Platform has organized various missions, putting academics and companies from Belgium and China in touch with each other. Luc Taerwe: “Since 2013 – and until the outbreak of the corona pandemic – the number of missions was skyrocketing. In China it is very important that you are able to rely on a network and that you regularly see the people on the ground. Our representative in Beijing, Mr. Zhang Chi, is the perfect go-between: he lived in Ghent for a long time, so he knows both cultures and really feels like a member of Ghent University.”

The representative office in Beijing also plays an important role in alumni associations. Inge Mangelschots, coordinator of the China Platform: “Ghent University’s first two international alumni chapters were launched in China in 2013, namely in Beijing and Shanghai. Today we already have four Chinese chapters. They organize different activities every year, often linked to our own missions.”

Alumni also do their best to promote Ghent University during the large Education Fairs in China. “By sharing their personal experiences, they are more likely to convince potential students and their parents to choose Ghent University or our Global Campus in South Korea. You won’t find any better ambassadors!”

Ghent University is increasingly internationalizing its activities, and especially the growing diversity among (doctoral) students and researchers is worth noticing. Chinese students form the largest group of international students at Ghent University. In 15 years, the number of doctoral students has increased to more than 700, compared to about 150 in 2006.

The co-financing agreement between Ghent University and the China Scholarship Council (CSC) gives a huge boost to student exchanges. Inge Mangelschots: “Up to 80% of Chinese doctoral students come to Ghent with a CSC scholarship. And every year, more and more Ghent University students from our faculties find their way to a partner institution in China: part of them finance this exchange with a CSC grant.” The student exchange stimulates not only academic knowledge, but also cultural enrichment and mutual understanding.

Finally, the China Platform also leads to abundant academic collaboration. In the past 15 years 11 Joint Labs and several joint research projects already have been set up across almost all faculties. And it is clearly paying off. Luc Taerwe: “In the period from 2001 to today, Ghent University’s researchers published more than 850 joint publications with Chinese colleagues. That is a hugenumber.”