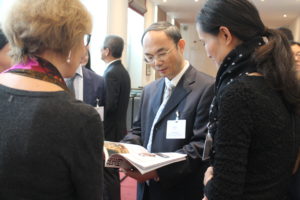 The Belgian-Chinese Chamber of Commerce (BCECC) was pleased to invite you to a Meet & Greet with the recently appointed Ambassador of P.R. China to Belgium, H.E. Mr. Cao Zhongming on Wednesday October 24, 2018 at Cercle de Lorraine – Club Van Lotharingen.

You will find here a short article about our event, by Martin Banks.

Please find hereunder some pictures of the event ©BCECC