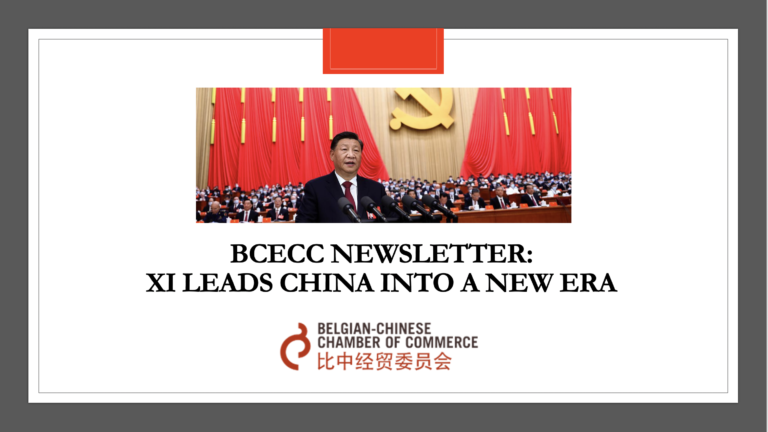 At the Chinese Party Congress in mid-October, Xi outlined the contours of the Chinese future in his speech “The New Era Needs New Development Pattern”. China has been officially poverty-free since 2021. The country aims to evolve into a moderately developed country by 2035. By 2049, China should be a developed country. Xi made clear that China is still in transition. But that transition is being complicated by 3 structurally negative trends: debt, de-globalization and demographics.

Changing demographics are putting pressure on the current growth model. Until about 15 years ago, rapid growth with significant job creation was the main goal due to the increasing working population. Everyone having a job contributes to social stability. Now that the workforce has been declining for 15 years, the focus is changing.

China wants to become less the factory of the world and more committed to quality jobs that generate more income. The simple factory work can then be outsourced to cheaper laborers in poorer Southeast Asian countries and Africa.

Consequence of the Cultural Revolution

But to increase income and consumption through the creation of high-quality jobs, you need higher educated workers and white-collar workers. China has too little educational capacity and the quality of its colleges and universities is insufficient to provide the necessary highly educated people. To illustrate: China has ten top universities, Belgium has 3, but there are a hundred times fewer Belgians than Chinese.

The result? It wasn’t until the mid-eighties that there was a revival of newly graduated professors. Many colleges and universities have been around for less than 35 years. They often have a long way to go in terms of quality. Moreover, the West is less and less fond of academic collaboration with China.

This situation makes education an essential Chinese problem. If insufficient highly educated people graduate, insufficient high-quality jobs can be filled, the average income rises inadequately, domestic consumption does not increase sufficiently, companies cannot grow satisfactorily and there is not enough money for social security. For the average Chinese, this means he’s getting old faster than he is getting rich.

A large part of that wealth – 60% – belongs to Chinese citizens in real estate. 90% of Chinese own their home. The skyrocketing debts in the real estate sector are worrying Xi and the Communist Party. “Real estate is intended for living, not for speculation,” Xi said a while ago. In doing so, he also explains the great inequality in China. Speculators are driving up prices and making housing unaffordable for ordinary Chinese. The implementation of strict conditions for new debt and new legislation restrict this. The results are bankruptcies and government interventions.

New measures have recently been announced to support the ailing real estate market. The great importance of real estate for the average Chinese and the economy as a whole (about 20% of the Chinese GDP) makes it too important to collapse. A move has started from a real estate model from ‘pre-sale first and finish later’ to ‘finish first and then sell’. In the long term, this is good for the financial stability of the Chinese economy. But due to all these changes, it will take years for the Chinese real estate market to contribute to economic growth again.

Deglobalization is the third major challenge for Xi. Globalization and growing exports, accelerating after WTO accession, have made China great and strong. The western countries do not want to feed the power of the Chinese autocracy and its friendly autocracies any further. The recent restrictions on American semiconductor equipment are part of this.

Instead of cooperation with the West, we are moving towards a system of competition and possibly even confrontation. Securing China’s further development independent of other countries is therefore of crucial importance to Xi. His Chinese ‘national security’ spans no less than 16 different areas, including politics, economics, culture, technology, space and overseas interests. For think tank MERICS, this comes down to the “security of everything”.

The changes that must be implemented require hard choices. Xi has shown that he is willing and able to make them. Important examples of this are tackling the real estate developers and the power of the e-commerce and tech players and private training companies, regulating data security, curbing CO2 emissions and promoting common prosperity. Most of these respond to a real need to put the Chinese economy on a sustainable growth path. But its simultaneous introduction has turned business upside down, confusing and discouraging investors.

The further evolution to a new model will be difficult. It takes years for reforms to contribute to economic activity – if they succeed. All of this implies that slower growth and more volatile, politically driven markets will become the new normal for China.

Please note that the views expressed in this article are those from Koen De Leus and do not necessarily reflect the views of the Belgian-Chinese Chamber of Commerce (BCECC).