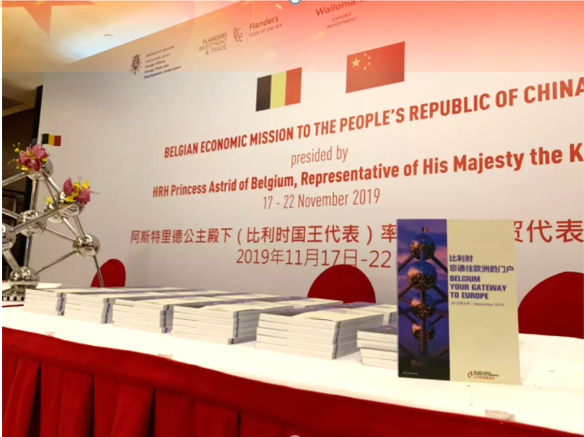 From November 17 to November 22, 2019, the Belgian-Chinese Chamber of Commerce (BCECC) joined the biggest ever Belgian Princely Mission to Beijing and Shanghai. The Belgian Economic Mission to China presided by HRH Princess Astrid counted more than 630 participants from all parts of Belgium and was accompanied by HE Didier Reynders, Deputy Prime Minister and Minister of Foreign Affairs and European Affairs, and of Defense; HE Pieter De Crem, Minister of the Interior and Foreign Trade; HE Jan Jambon, Minister-President of the Government of Flanders; HE Willy Borsus, Vice-President of the Walloon Government; HE Pascal Smet, Secretary of State Government of the Brussels-Capital Region as part of the official delegation.

The BCECC, together with BNP Paribas Fortis, kicked off the week full of events, seminars, B2B’s and networking receptions with a breakfast debate on Monday morning in Beijing. Under the theme of ‘Belgium & China: A smart partnership. Challenges & Opportunities’, more than 200 guests could hear about the current situation of doing business with China and views on which path business will take in the near future from important players in the Belgian and Chinese Economy, such as UCB, Solvay, AMS, BNP Paribas and the General Administration of Customs and Excise.

The Belgian Economic Mission has also seen an incredible amount of MOU signings all witnessed by HRH Princess Astrid and the official delegation, such as an agreement between the BCECC and the China International Cooperation Association of Small and Medium Enterprises (CICASME) which aims to strengthen and expend the cooperation between Belgian and Chinese SMEs.

During the second part of the mission in Shanghai, the BCECC together with Unizo and KBC organized an event focused on ‘Connectivity between East & West: An Era of Change and Transformation’. Our guest speakers representing KBC, Liège Airport, Port of Antwerp, Belgian Customs, and the BCECC together with 4 panelists tried to explain and find answers to how Belgian companies have taken advantage of the increasing connections between Belgium and China, be it by air, land, or sea, or even digitally; what the situation is today; and what opportunities are arising from the further development of the Belt & Road Initiative and the booming e-commerce industry.