How did China handle the exit from the corona lockdown? 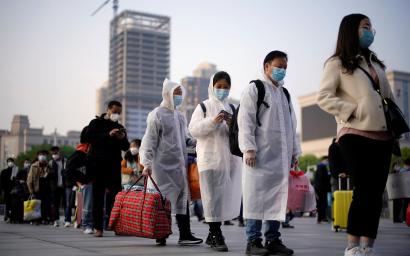 In Belgium governments and experts are thinking about how to plan the exit from the corona-lockdown and the rebuilding of the economy. Everybody is looking at China to see whether the country can lift its lockdown without a significant re-appearance of COVID-19.

China is dealing with the exit for the lockdown in two ways: (1) a gradual opening up of businesses and schools and (2) the use of technology to monitor people’s health status and movements.

Gradual opening of businesses and schools

China is still implementing extensive COVID-19 monitoring nationwide. The first phase of the exit included the reopening of a part of the most non-essential shops, taking into account the strict social distancing measures. Travel was discouraged and many international flights banned. In the second phase, unlimited car journeys were allowed, and the wearing of face masks and disposable gloves became mandatory on public transport. Restaurants were allowed to open only if they have strict seating demarcations to keep people at a safe distance. Only in the third phase any sort of sporting event or other mass gatherings, such as music festivals, will be allowed to take place.

Today it can be seen that consumers are slowly returning to stores and restaurants. Nevertheless, in March shopping malls in Shanghai were reporting a 70% decline as compared to pre-coronavirus levels.

As far as the schools are concerned, different cities have adopted different policies. In some provinces schools already opened at the end of March or early April, about 2 months after the outbreak of the virus. Furthermore, schools are reopening in batches. In Shanghai for example, starting from April 27th only students in the final year of senior and junior high schools can return to school, as well as soon-to-be graduates at higher education institutions and secondary vocational schools. Students from other grades will return to school in batches no later than May 6.

Teachers and students enter schools at separate times and must have their temperature checked when entering and leaving the campus, even during the daytime. Anyone whose temperature exceeds 37.3°C after being measured twice will be sent to an isolation area and reported immediately to the principal.

Many provinces issued a QR code to all residents, a type of barcode containing information that is revealed when scanned, based on their health details and travel history. The system generates a QR code in one of three colours. A green code enables its holder to move about unrestricted. Someone with a yellow code may be asked to stay home for seven days. Red means a two-week quarantine. These measures not only keep infected people from mixing with others, but if a new infection is detected, the government can track that person’s movements and locate people they might have come in contact with.

The system was first introduced in the eastern city of Hangzhou, the home of Alibaba, with many cities adopting their own system. Some systems are mutually recognized between cities and provinces. Intensive use of the health code is part of the efforts by authorities to revive China’s economy while preventing a spike in infections as people return to their factories, offices and shops.

Foreigners often are subject to more rigorous screening, just having a green code is not enough. Security guards may also ask for your passport and may check your exit-entry records.

All stakeholders hope that the country will rebound in the second half of 2020. According to the South China Morning Post, China’s economy shrank by 6.8% in the first quarter of 2020. Industrial production, retail sales and fixed asset investment all dropped in March, showing challenge in restarting the economy. Even with a sharp rebound during the remainder of the year and sizeable fiscal support, the world’s second largest economy is projected to grow by only 1.2% in 2020, down from the IMF’s previous forecast of 6.0 per cent growth, and far below the 6.1% expansion recorded last year.